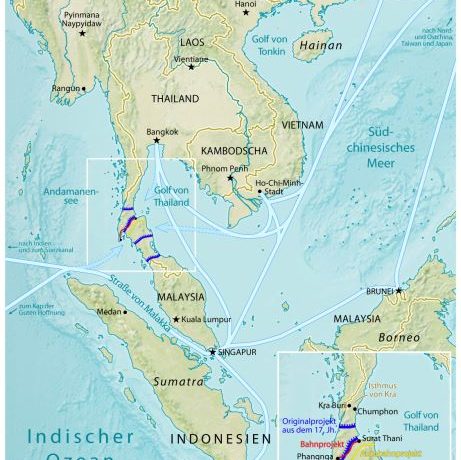 As mentioned repeatedly in our blogs, Thailand is one of the most active members of the Association of Southeast Asian Nations when it comes to investment and free trade. Because of that, you can be sure that the Kingdom has definitely put in money into a lot of infrastructure projects.

These projects are necessary in order to facilitate smooth transit of goods, services and labor in and out of the country, and in between itself and its partner states in the ASEAN.

Let’s take a look at some of the ongoing infrastructure projects in the Kingdom that investors should watch out for.

First announced in June last year, the project aims to develop these provinces with an eye for turning them into tourism hubs like many cities and provinces all across the nation. These plans include an aggressive marketing campaign to highlight the areas, and the development of the necessary infrastructure to facilitate convenient travel for both locals and tourists alike.

Thailand’s government is really pushing to become one of the main hubs of the ASEAN push for free trade and economic opportunities in the region. Proof of this commitment is the government’s comprehensive plan for Chonburi, Rayong, and Chachoengsao.

The aforemention are three provinces located alongside the Eastern Seaboard of Thailand. The government is interested in developing these three countries and providing them with the necessary infrastructure that will turn it into a major economic zone in line with ASEAN’s push for free trade.

The project is estimated to cost around US$ 43 billion and is projected to be completed around 2021.

As you could see, Thailand’s central location in the ASEAN region gifts it with a lot of strategic areas. These areas are all within the sights of the Kingdom’s government, and are subject to investment and development.

The Kra Canal is one such area of strategic importance, and is now poised to finally receive the attention it receives reportedly with the assistance of China under the Belt and Road Initiative. This project is similar in function and importance to the Egyptian Suez Canal, and will allow maritime traffic to shorten travel time by going around the Malacca Strait.

Bear in mind, however, that the Canal Project is still not confirmed. There are reports that China and Thailand have already inked a Memorandum of Understanding as early as 2015.

Both the Chinese and Thai governments have not issued any official statement on the project, although the Kingdom is also courting investment from other ASEAN states and East Asian Nations like Japan and South Korea.

If it pushes through, the Kra Canal Project will take at least a decade to be completed, and will provide employment opportunities for both locals and foreign investors throughout that period.

If you want to know more on how to stay and do business in Thailand, contact us.

3 Things While on a Business Trip to Bangkok

Health and Well-Being Are Ensured In Phuket