Getting Married in Thailand – The Thai Dowry

Getting Married in Thailand – The Thai Dowry

By admin Posted on February 15, 2017 in News & Update, The Kingdom of Thailand 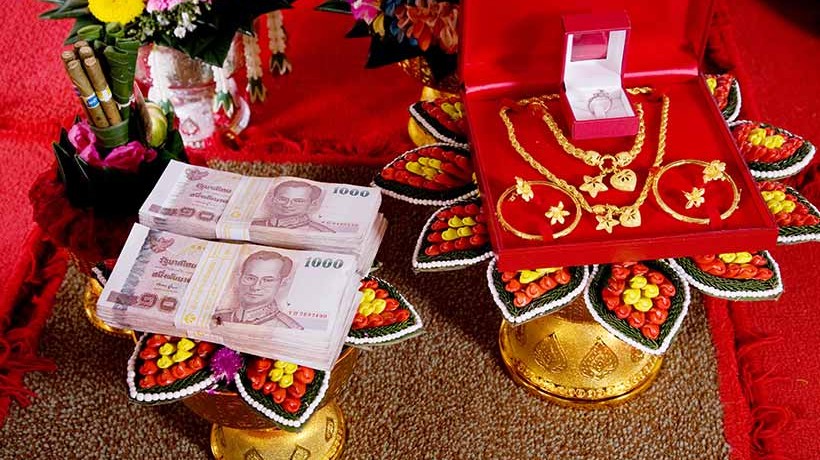 As a foreigner, finding love in Thailand and deciding to tie the knot is a beautiful thing. However, you’d also need to look beyond the emotions and see what legal stuff as well as some traditional customers you need to know about before you get married.

One of these concerns is the dowry, a traditional lump sum of money that the groom is compelled to give to the family before the wedding. It is actually a topic that is not so well understood by Westerners. Find out what this is about, even before you set foot to the Kingdom of Thailand. After all, you’d never know when Cupid’s arrow will hit you.

First off, the tradition of the dowry, which is referred to as “Sin Sod” in the Thai language, takes roots in the closely knit families that Asians are known to observe. For the bride’s family, giving their daughter’s hand in marriage is not a small matter. For that reason, they need to be assured of the financial capabilities of the groom.

That’s where the dowry comes in. It’s a proof that you are more than capable of taking care of the bride, as you are able to produce the sum that the family requires of you when you undergo the engagement ceremony or Bai Sri Soo Kwan.

Understandably, this doesn’t make sense to Westerners. Some may think that it’s like purchasing the bride from her family. However, it doesn’t work that way. The dowry is actually symbolic, and does not signify a sale or transaction. More often than not, the bride’s family will also ceremonially return your money to you after the marriage.

How Much Should the Dowry Be?

The amount, without doubt, is the aspect of the dowry that concerns foreign grooms the most. How much should one give to the family in the wedding ceremony as a dowry? This has naturally led to fears within some individuals that the dowry might be too expensive for him, and several potential marriages have gone down the drain because of this.

Furthermore, “horror” stories of dowries going as high as THB1 million exist online. The truth is – that amount of dowry is unheard of. You could, however, find a more realistic amount of THB100,000.

The truth is, the amount of the dowry is dependent on the social status and/or the educational attainment of the bride. Well-educated brides with a good work career can fetch at least THB100,000 or even up to THB300,000 in dowries.

It is worth noting that the dowry can go down if the bride had already been in a previous marriage that was annulled. Women with children from previous partnerships will also have comparatively lower dowries than single ladies.

The dowry is a complicated aspect of Thai culture, but also one that you need to educate yourself about if you’re planning to retire or at least live in Thailand for the long term. A legal advisor can truly be a big help for you in that.

4 Pitfalls to Avoid When Finally Retiring