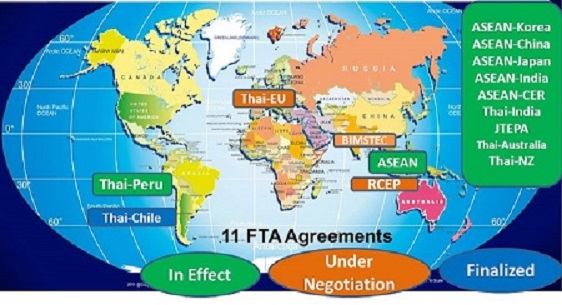 If you’re following news and updates regarding opportunities for business abroad, then you’ve certainly come across terms like FTAs.

FTA is simply an acronym for “Free Trade Agreement.” It is, basically, a deal inked by two or more nations that facilitates trade that, often times, favors both countries instead of only just one. Thailand is one of those countries that support such trades and, as such, is a signatory to multiple free trade agreements with various countries like Australia, the United States, and others.

So what exactly are free trade agreements? What possibilities do they open up for business entities looking to engage in enterprises in countries outside of their own?

One of the most apparent effects of a free trade agreement between two nations is the reduction of or, in some cases, the total removal of the customs duties that companies pay to import stuff into a foreign country they’re doing business in. The influx of goods and even services now totally becomes “free,” in this case.

The whole idea is to make trading between companies in the two nations free flowing, without having to be restricted by taxes and other duties that make trade between two countries financially unfeasible.

Local labor is, of course, employed extensively by companies who establish their presence abroad. However, they will want to “import” some of their employees from their home country to work with them in their new office. When that happens, foreign labor is introduced into the foreign country.

Thus, you could say that the existence of free trade agreements encourages the influx of skilled foreign labor between the two countries. This is because of the foreign-owned companies operating in the two nations who bring in foreign workers to be under their employ.

The other type of free trade agreements foreign investors are likely to encounter is the multi-lateral trade agreement. Multi-lateral FTAs are designed to cover a huge expanse or territory in which free trade can be made possible. These require the signature of at least three countries. They are more difficult to negotiate but can have powerful economic implications once signed.

One example of a multi-lateral free trade agreement is the North American Free Trade Agreement or NAFTA. This agreement resulted to the elimination of tariffs for imports and trade facilitated between the United States, Canada and Mexico.

A Look at Thailand’s Multiple Entry Visa for Tourists